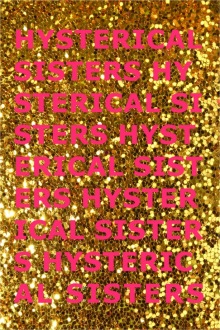 Who are we in this womb with? Where are we? Who are our sisters?

These are the questions of Hysterical Sisters, a new volume of poems by Lindsey Frances Pellino. These poems reclaim—and recognize—high femme power in a world troubled by terrific violence.

If you ceremonially burned dozens of issues of Tigerbeat, you might read Hysterical Sisters by the light of the fire. I felt at times while reading the book that I should be holding a pink pleather, heart-shaped pocketbook stuffed with crow feathers, or that I should be wearing black velvet.

There are tributes to the late poet Stacy Doris and to Marilyn Lovell, listed on Google as “American housewife,” the wife of astronaut James Lovell. Pellino’s poem about Lovell, “Honeymoon,” gives the word new meaning.

There are poems about Britney, girl poems “i practiced alone drawing her shape in silver gel pen/on my black papered diary.” But the poems of this book also reveal the shriveled fingernail moldering under the shining acrylic.

“The Siren” discusses Omayra Sánchez, a 1980s Columbian volcano victim whose legs were trapped underwater for days before she died at 13. There’s a poem about JonBenét Ramsey, child beauty queen who’s inhabited American tabloid racks for two decades. There is a poem about June and Jennifer Gibbons, the so-called “silent twins” who spoke only to each other, and who experienced forced institutionalization in England. Many of these poems are about girls and women who are famous for their deaths.

What is the point of all this? I don’t want to read about violence against women. Those of us in bodies deemed or claimed as “woman” live out violence culture, to varying extents, as we move through each day. But it’s necessary that poems exist about the things we can’t escape. When a woman writer describes violence, we need to listen, especially when she deals with the subject matter in such an unusual collage of ways, especially when she deals with the celebrity of it.

Poetry is, in a way, an umbilicus from writer to reader. The poet Pellino examines the ways that we glamorize violence against women. The poem in the voice of Maria Elena Milagro de Hoyos, a corpse bride, speaks from the dead “in all my splendor and terror.” She is a woman whose death was literally dressed up. How many other women do we know like this?

By the end of the collection, it is we who are the hysterical sisters, wondering, panicked, disbelieved. Why have so many women have died in such terrible circumstances? Why does fear of these circumstances still dictate the ways we operate?

In some ways, these poems are a version of Grimm’s Fairy Tales, those with dark, messy endings. They are a reflection of what it means to be “to be that throbbing mass/that no one wants,/crafted of pure rejection.”

Readers who appreciate Ai’s work will recognize what is happening in Pellino’s poems. Sapphire’s poetry also comes to mind. These poems are girls armoring themselves with feather boas and stick-on nails as they learn the excruciating, harrowing lessons of what it might mean to live and die as women.

2 thoughts on “Review of Hysterical Sisters by Lindsey Frances Pellino”

How Distant the City (Headmistress Press, 2018)

“Eleven Micro-Memoirs from the Pandemic” in Cleaver Magazine

“What’s Worth Fixing” in Flyway Journal

“Detour of War” in Small Orange

“Sonnet for Road A” in Rogue Agent

“If This is My Last Message” in New Verse News

Find links to more of my work in Publications.